In the Shadow of the United States Capitol: Congressional Cemetery and the Memory of the Nation

Ronald M Johnson Oct 13, 2021 Ronald M Johnson
This study explores the multiple ways in which Congressional Cemetery has been positioned for some two hundred years in "the shadow" of the U.S. Capitol. The narrative proceeds chronologically, discussing the burial ground during three periods: a) The antebellum years; b) The years from the end of the Civil War to approximately 1970, when the site progressively deteriorated; c) The period from the early 1970s to 2007, when both public and private organizations worked to preserve the physical site and the memory of what it has been and continues to represent. This monograph on Congressional Cemetery focuses on the dominant narrative associated with the site: its legacy as the first national burial ground in the United States. Given this emphasis, the text presents a political and cultural analysis of the cemetery, with particular focus on the participation of the U.S. Congress. "This book makes historians and many others aware of a fascinating and complicated history. Moreover, it not only details the long history of the cemetery, but it uses it to explore the nature of historic memorials generally in the creation of national memory." -Steven Diner, Chancellor of Rutgers University at Newark. "The Johnsons have done an excellent job of mining a wide range of sources and conveying the complex history of an institution that merits documentation... It's stunning to realize what a who's who exists in that space." -Howard Gillette, Professor Emeritus at Rutgers University at Camden. "The history of Congressional Cemetery is intimately tied up in the changing demographics of its locale, and its corresponding decline as the neighborhood around Christ Church changed led to its emergence as a cause célèbre for historic preservationists." -Donald Kennon, Chief Historian for the United States Capitol Historical Society, and editor of The Capitol Dome. 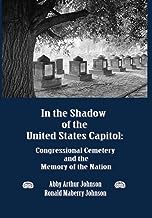 Book Title: In the Shadow of the United States Capitol: Congressional Cemetery and the Memory of the Nation