Richard Demarco,Keith Hartley,Douglas Hall Oct 21, 2021 Richard Demarco,Keith Hartley,Douglas Hall
Richard Demarco co-founded the Traverse Theatre in Edinburgh in 1963 and ran the vibrant Richard Demarco Gallery in Edinburgh for almost 30 years. He promotes crosscultural dialogues and was the first person to introduce Joseph Beuys in the UK. Joseph Beuys was a German sculptor and creator of actionperformances, political activist and teacher. This book explores the works, lectures and Actions which resulted from the mutual hopes, inspirations and shared values of Richard Demarco and Joseph Beuys, the innovative and inspirational German postwar artist, from 1970 until Beuys death in 1986. Demarco, an avant-garde gallerist in Edinburgh, was an early proponent of Scotland taking its place within the European art world; Demarco recognised the visionary quality of Beuys work and visited him in Oberkassel in January 1970. In the hope of focusing Beuys attention on Scotland, he presented him with a set of postcards depicting typical Scottish scenes. Beuys responded with, I see the land of Macbeth, so when shall we two meet again, in thunder, lightning or in rain? They reunited in thundery Edinburgh later that year and Demarco led him northwards along the ancient track he calls The Road to Meikle Seggie . This initial experience of the Scottish landscape inspired Beuys, who felt a strong connection with Celtic culture, and laid the foundation for a remarkable artistic friendship which enriched the work of both men. With photos from Demarco s personal collection and essays spanning from 1970 to the present, this is an intimate and intellectually rigorous look at a friendship seminal to the development of art in Scotland over the last 40 years. 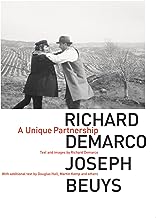